Now that spring has finally sprung, yours truly will start making the rounds of ’s various ‘hoods to scope out some of my favorite retail destinations. Since I live on the I’m starting off with my part of town, which I’ve christened NOB or north of Bloomingdales! In future blogs I’ll hit , etc.

French Sole is the place to go for those cute ballet flats that we can’t live without. Fortunately, this is the company’s outlet store so prices are definitely affordable and the selection is terrific. Personally I favor the classic quilted/patent toe cap style but there are lots more. So in case you don’t have a thousand bucks to spend on some designer name this shop is your best bet. Location: ; Phone: 212 472-9200

Dooney & Bourke is a wonderful source for preppy chic handbags, totes, travel bags and more. The look is old money for a fashion savvy generation. Frankly, I find the quality to compare favorably with Ralph Lauren at a fraction of the price. On my latest pit stop I found darling bright patent bags, whimsical (Dooney) duck patterned totes and lots more to love including some fabulous chunky unisex watches. For fall, there are FABULOUS tartan duffels, totes, satchels and more in black watch or Stuart plaids. And don’t pass up the “Lee” totes in gorgeous fall shades, Personally, I’d opt for one in cobalt or . Here’s the best part – everything’s under $200 retail! That Peter Dooney is one smart cookie. Location: ; Phone: 212 223-7444.

Wink is a tiny hole-in-the-wall clothing boutique that’s chock full of affordable, (but not) terminally trendy fashions for the under 40 crowd. While this retailer also has two other outlets, this shop is my favorite for the range of young designer labels. On a nice note, shoppers are asked to bring in a gently worn dress and Wink will donate it to Housing Works. Here’s the best part. Do that and get $50 towards the purchase of a new dress from the Wink collection. Location: ; Phone: 212 249-2033

Furla is another source for beautiful leather goods. OK, the prices aren’t exactly cheap but the quality is superb. Instead of checking out the sales, wait till July/Aug and splurge on one of their stunning fall bags. My choice would be the “Susana” clutch (yes it holds plenty) in cherry or deep cobalt faux croc. You’ll wear it for many years and always look gorgeous and of the moment. The $525 it’ll cost you is still a heck of a lot cheaper than most other “designer” bags and you won’t look like a fashion victim. Location: ; Phone: 212 755-8986

M.A.D. is a vintage couture and designer resale boutique. Since it’s not located in trendy SoHo/NoHo yada yada yada, the shop’s off the the fashionista set’s radar. The owner, Marion Alexander has a hawk’s eye when it comes to selecting the best rtw, accessories and shoes. While not every piece carries a designer label, the savvy shopper can usually spot the provenance. Prices are terrific and there’s something for everyone. When it comes to buying vintage, forget seasons and buy what you love as it may not be there next time. I’d check out the great ‘70s YSL wool coat from his Russian collection. It won’t kill you to store it away for next winter. ’s also got some great jewelry from top designers and witty evening bags – all of which can be carried year round. You can also check out her website at www.madvintagecouture.com. Location: ; Phone: 212 427-4333.

So now that you’ve shopped ‘til you dropped why not stop by the cozy new Yorkville Creperie for a $6 glass of wine and one of their delicious filled crepes? Personally, I loved the midnight crepe as I’m a chocoholic, but I plan on working my way through all the other varieties. It’s only been open about a week and already the buzz has started. Prices are friendly as crepes run between $5- $7 so go ahead and indulge. And if crepes aren’t your thing, they also serve some tasty paninis. Location: ; Phone: 212 570-5445

Until next time, happy shopping, C&C

From time to time I’ll let you in on what I consider to be the best retail buys. It won’t always be the cheapest stuff around, but nevertheless the items I’ve scoped out are what I feel is worth spending your hard earned bucks on.

Renee Stern Cosmetics is an extremely affordable boutique line that right this minute consists of (with some of the best staying power) a comprehensive range of powder eye shadows and blushers. In , the collection is available exclusively at ’s at . You can also call toll free at 800 RX . At a nicely priced $16 for the shadows and $22 for blushers, the company has garnered a devoted following. Ms. Stern is on hand most Thursdays to offer her expert advice and answer questions. It’s also worth buying her $18 eye shadow brush and the $26 blush brush. These two are all you’ll ever need and definitely a bargain. Trust me, I’ve checked out the outrageous prices some other makeup brands are charging. Why pay big bucks for some designer name when you can get the same top quality at much lower prices?

Also at 980 Mad is a wonderfully quirky but definitely upscale boutique, Clearly First. The store sells everything from men’s and women’s apparel to footwear, and items for the home, etc, primarily manufactured by top Scandinavian designers. The ambiance is great, with interesting music playing and a friendly sales staff – no hard sell here. Sure, most of the prices are high (and for the most part, worth it) but Clearly First has come up with a great alternative. Every week the store puts a few fab items on sale at 50% off, and alerts shoppers to the deals with window signage. Last time I looked, Tretorn sneakers were a steal, but next week it could be something equally worth getting. You can call the store at 212 988-8242 for updates on the latest deal.

This next item, while not exactly bargain priced should appeal to anyone looking for an unusual one-of-a-kind item either for themselves or for a special gift. The HBO Shop in commissioned Natalie Chanin, creator of clothing label Alabama Chanin (founded to preserve American craft traditions and a community-based culture), to design an exclusive, limited edition collection of embellished tee-shirts. The kicker – each tee is hand made and recycled from previous HBO collections featuring logos and key themes from hit programs like Sex & the City, The Sopranos, etc. The collection consists of men’s and women’s tees with Chanin’s signature hand stitching, embroidery and appliqué details. The prices, while not a steal at $65 and $85 (approx.) are on target for the unique quality of the pieces. In addition to the HBO store at in , the line can be bought online at www.HBO.com/store. It’s worth checking out.

Sex and the City - Carrie Bradshaw Wishes She Had These!

Flight of the Conchords and the Sopranos - Hipsters and the Mob Agree on Tees!

Lisa F. Pliner sent me some pictures of her "Basim" line of boots which I described in my last entry.

Ahh... to have to wait through a summer is just too long to wear these. Buy a pair, or all three pairs, and you have the perfect excuse for that trip to points north or far south where it is still weather-appropriate for these gorgeous boots.

Lisa F. Pliner:
She Just Gave You Three Reasons
to Take That Summer Trip to Greenland
1) Patent; 2) Taupe; and 3) Midnight 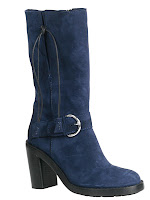 It’s never too early to think about your fall wardrobe, especially, if like me you’re on a budget and need to plan ahead carefully. This column is all about three collections, two of which are making their debut.

Blanc de Chine
First up, Blanc de Chine’s luxury rtw collection which I recently checked out at the brand’s fall fashion show. Held in its flagship store complete with a runway presentation, we were treated to a lineup of some of the cleanest, understated and timeless clothes albeit with a modern luxury Chinese twist. While I did like some of the women’s fashions, it was the menswear that blew me away.

To quote the press release, “the collection uses an unconventional approach of modifying classic pieces and making them into unexpected unique designs.” The menswear favored fine supple wool in black tones and cashmere and crepe in royal blue. One ensemble I loved and could picture on the actor Armand Assante (who was in the audience) and anyone with an ounce of style, was the box quilted “Zhong Shan” jacket with removable sleeves over “hand pocket” casual pants. It’s not often that I talk about menswear, since most of the time, the clothes are boring, but not in this case. The prices are steep, but the stuff will last a lifetime and never look dated.

You’re all aware of shoe designer, Donald J. Pliner. Not only do his styles stay on trend, they’re actually comfortable to walk in. While, the brand’s celebrating 20 successful years in business, it was inevitable that his gorgeous (and really very sweet) wife, Lisa would launch her own line. So for fall ’09, her capsule collection consists of fashion forward platforms, sculpted wedges and rugged boots. I particularly coveted the “Basia” chunky heeled suede boot. If I had to sum up the Lisa F. Pliner collection I’d say that her footwear combines comfort with sex appeal – and isn’t that what we all want now? P.S. Both collections feature some stunning handbags. Donald has a gigantic hobo that’s roomy enough to use as carryon luggage yet weighs next to nothing! Look for both lines in most major retailers or email the showroom for more info at www.donaldjpliner.com.

Kate SpadeLast but definitely not least, is Kate Spade. I was lucky enough to be invited to attend the launch of Spade’s debut fall ’09 rtw collection. The brand has grown like topsy, starting with just a simple fabric tote (that was copied to death and sold by every street peddler), and has now morphed into shoes, eyewear, stationary, accessories and at last, apparel. While some designers are reviving the – horrors - ‘80s, Kate Spade is taking another direction. The adorable ladylike yet hip collection definitely referenced the 1960s looks favored by top models of that era Jean Shrimpton and Twiggy. While most of the clothes are aimed at the under 35 crowd, there were some striking pieces that anyone could wear, from the horizontally striped navy/gold cropped jacket and skirt to a drop dead gorgeous black/ivory coat in a stylized animal pattern. Even the shoes were terrific, particularly the pretty black suede sling back, open toed stilettos trimmed across the vamp with a shocking pink (or white) triple looped satin bow. If you’re gonna wear platforms this is the one to buy. It’s graceful, not terribly high so you can actually walk in them, and won’t look dated after one season.

In upcoming blogs, look for the following:

Neighborhood Watch: My picks for the most interesting retail stores in the ‘hood.

Steals and Deals: Check out some of the best values around town, from sale items to store promotions.