By now you’ve heard all the hype surrounding the Alexander McQueen Savage Beauty costume exhibit presented by the Metropolitan Museum. Apparently this has become the most popular fashion exhibit in the Met’s history. It kind of makes me wonder if McQueen’s suicide and all the surrounding hoopla is a major factor in the show’s popularity. For my money the Iris Apfel exhibit was far more interesting but that’s just my opinion. So why did I attend? As a member of the press I always get a first hand preview of any costume exhibit (without the crowds plus free coffee and Danish) put on by the museum. Since every news outlet has covered this exhibit a million ways I won’t bore you with the details of the actual clothes except to state that I’m not a fan of apparel and accessories that creep me out like some of the S&M flavored designs (yes I know that McQueen was a troubled soul but I really don’t want to wear or see anything that is designed merely for shock value). On a more positive note, it’s a given that McQueen was a brilliant technician with an extraordinary imagination and flair for the dramatic. Some of his designs make Vivienne Westwood’s creations look totally tame by comparison. However I would definitely love to own any of the red and black tartan numbers that artfully updated the traditional Scotch plaid, not to mention some exquisite evening wear that utilized gorgeous Japanese kimono fabrics, and a breathtaking ball gown fashioned almost entirely of real and faux flowers. Now that’s what I call an entrance maker. Question? If one wanted to wear this more than once would she have to water it? Just asking. 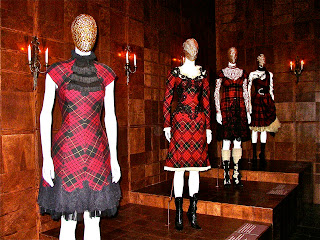 
Miracle-Gro is a Fashion Necessity! 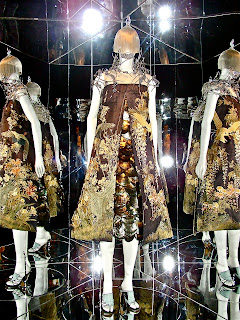 (photo by M. McKenzie)
While the Met Costume Institute gets all the attention I personally find that the FIT Fashion and Textile History Gallery does an equally if not oftentimes better job of showcasing fashion (and does it without the annoying crowds that makes it almost impossible to focus on the clothes). I recently attended their latest exhibit, Sporting Life that examines the history of sports clothing from the mid-nineteenth century to the present. The exhibit is divided into sections devoted to particular sports and uses clothing and accessories from the museums permanent collection. We’ve come a long way baby from the heavy woolen swimsuits and athletic wear of the past century to the sleek and functional garments of the 21st century. This exhibit blew my mind and I highly recommend that you check it out before it ends its run November 5th. On a more high brow note, if you love fashion and plan to be in Paris this summer why not check out the Les Enluminures “Dressing Up and Dressing Down in the Middle Ages and Renaissance: Costume in Art” until August 25th. As part of its series of 20th year anniversary celebrations, the gallery Les Enluminures is holding its exhibit at the Louvre des Antiquaires featuring about 35 works of art organized around three themes. The first showcases the diverse ways in which people in the middle ages dressed according to their station in life. The second theme focus is on the significance of color among the various classes, while the third theme throws a spotlight on rings and pendants, illustrating just how popular these pieces of jewelry were. If you go, the address is 2 place du Palais-Royal, 75001 Paris, Tel +33 1 42 60 15 58. The above exhibit is coordinated with two others in the U.S taking place at the same time. One is at New York’s Morgan Library and Museum that will continue through September 4th and the other at the Getty Museum in Los Angeles. This run ends on August 21st. Until next time, C&C.
Posted by C+C at 4:53 AM