Jean Paul Gaultier: From the Sidewalk to the Catwalk

The Montreal Museum of Fine Arts presented the first international exhibition devoted to one of my favorite couturiers, Jean Paul Gaultier (dates run until October 2nd). And since I never need an excuse to head up to my “home away from home” I decided that July was the perfect time to check the exhibit out since I was underwhelmed by the McQueen show at the Met and wanted to see if the Gaultier exhibit could wow me.

Dubbed “The fashion World of Jean Paul Gaultier: From the Sidewalk to the Catwalk” this major exhibition featured 140 ensembles, documents, excerpts from films, concerts, and more that Gaultier designed. Since the exhibition opened in June, I was surprised by the huge turnout that waited patiently for the doors to open (and these weren’t your everyday fashionista crowds, but “normal” people).
Parking Was Great, Too! 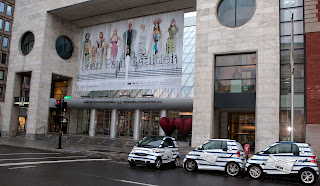 Jean Paul Gaultier VIP Party - Photo By Natacha Gysin
On entering the first room, guess what? A life size mannequin of the designer dressed in his signature striped Breton sailor top and trousers greeted us.
However what blew us all away was when he started to speak! You heard me, he spoke - in French naturally – complete with the appropriate facial gestures while the other mannequins both male and female also moved their mouths, blinked their eyes, smiled and/or even sang. I’ve never seen anything as fascinating as this innovation. I felt as if I were watching real people. The museum collaborated with Quebec-based UBU/Compagnie de creation for the design and animation of these playful figures. Who would have thought of animating thirty faces through an ingenious projection system (that was well hidden above the viewers)? Wearing fabulous wigs and headdresses the effect was startlingly lifelike. As I strolled through the different rooms and the various themes than ran the gamut from the boudoir and corsets (think Madonna’s cone bra), to Pigalle’s sex shops, London’s punks, to urban jungle and more.

I don’t know what dazzled me more, the incredible fashions or the mannequins themselves with their three dimensional video image masks projected onto their sculpted heads. Kind of creepy but in a good way. But getting back to the clothes I fell head over heels for Gaultier’s navy sequin sailor pants and crop knit top meant for guys (but I’d grab this outfit in a heartbeat).
Anchors Aweigh! 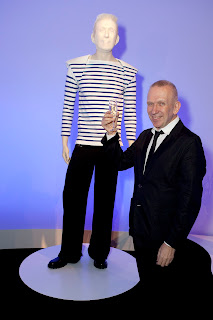 Jean Paul Gaultier VIP Party - Photo By Natacha Gysin
There was also his drop dead gorgeous black/white striped woven straw bolero whose huge collar doubled as a gigantic hat! So what else struck me as true couture? Only a magnificent 3/4 length crocodile peplum jacket in a rich brown with ribbed wool notch collar shown over flowing wool crepe trousers from Gaultier’s Hussars collection and the cutwork ponyskin and chiffon cardigan coat from his Samurai collection. It was utterly simple yet incredibly difficult to produce and to me, a work of true genius. That’s what couture’s supposed to be about. Leave it to Gaultier to consider this exhibit to be a “creation in its own right rather than a retrospective.” In fact, most of these pieces as well as his sketches, stage costumes, excerpts from films, runway shows videos concerts and dance concerts have never been exhibited.

Wandering from room to room I was struck by the designer’s incredible range and so I urge anyone who can get to Montreal before the show ends it’s definitely worth your while. Following this presentation, the exhibition will head on an international tour, with stops at the Dallas Museum of Art (November 13, 2011- February 12, 2012), The Fine Arts Museum of San Francisco, de Young (March 24-August19) and then on to Madrid and Rotterdam.

On a personal note, as a semi-compulsive shopper (I could find a designer bargain in the Sahara desert) I was disappointed in the offerings at the Museum’s gift shop. Sure I would have loved to buy one of Gaultier’s signature sailor top or his cute teddy bear dressed in a tartan kilt with punk gold chains attached, a very chic canvas tote with navy stripes, or even the basic black tee with Gaultier’s sketch and initials in white across the front but the prices were ridiculously high for my budget although I understand that the museum’s a private, non profit institution so it has to generate funds any way it can but to the powers that be, please, please, please, save me a tee shirt when I come back to Montreal in October!

That’s enough culture for now, next time I’ll tell you about what’s happening in menswear.