Yeah, yeah, every editor and fashionista out there knows well that Fashion Week is the time to be all sexed up; “Hot In New York”, so to speak. This season, of course, is no exception, especially when it comes to the super- voyeuristic Peep Show -- aptly called, “Risque Business: Luxury legwear Designed to Thrill” – done as a walk-through at Lincoln Center’s Box Gallery, by the legwear designer, Emilio Cavallini.

With an obvious eye on inciting a woman’s sexual fantasies, Cavallini opted for a “cinema verite” style of peeping tom look into the sensual and provocative world of a woman behind closed doors. Starting off the presentation in the darkened gallery, a line-up of live, blank-faced models, showed off the new hosiery and bodywear offerings. Soon after, the models left the stage, as a short film, entitled “Risque Business at the Florence Excelsior Hotel”, began to play on a huge, overhead screen. The film’s story line portrayed an obviously uninhibited woman with very short blond hair – obviously on some kind of holiday or retreat in Italy - enjoying herself on a bed, in her hotel room, after shopping at the Emilio Cavallini boutique. She tries on and then tosses on the floor, pair after pair of sexy tights and bodywear, as she falls into her own fantasy world of soft core pleasure, oblivious to everything around her, except the sensual pleasure of caressing her body with complete abandon and delight. As the film closes, the woman gets up from the bed, and leaves the room, dressed in nothing but a lacy, black, see-through catsuit.
Cavallini Channels Betty Page to Your Legs! 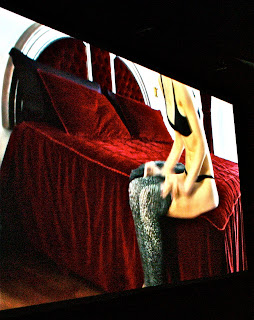 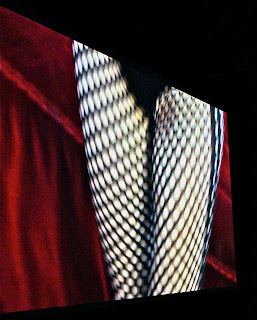 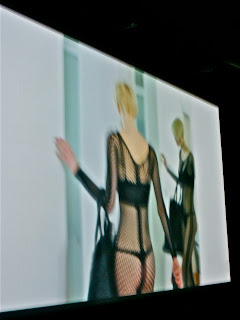 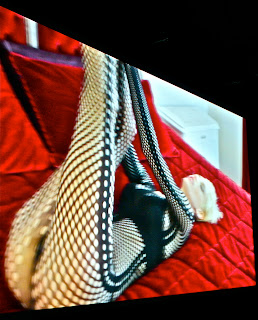 Photos Credit:  M. McKenzie
Watching the film, it is evident that Cavallini loves black, especially prevalent evidenced by so many of the pieces shown in that hotel room; floral lace and exaggerated fishnet tights, bodysuits and thigh-highs, seamed sheers with “tattoo” motifs, “shredded tights with matching skin-tight bandeaus, and the like. But, even with this being said, and while not seen on-screen, the designer still manages to have lots of fun with more whimsical pieces, such as tights and leggings, featuring optical graphics with bold stripes and big, wild dots with 3-D effects, right along with “Borrowed-from-the-boys” textile patters in plaid, chevron, houndstooth and argyle. It does not seem to be any accident that this collection is meant to channel Betty Page, the notoriously sexy, 1950’s pin-up model, while exploring the sexual freedom and fantasies of all modern women, for as Cavallini explains, “Bettie Page was the ultimate femme fatale, inciting the fantasies of men and women, at a time when ‘nice girls’ would not dare to look like that or act like that.” Well, in 2012, nice (and not so nice) girls certainly do want to look and act like that, and from the looks of this designer’s presentation and collection, those girls are going to get their way. – ADWB, C&C editor-at-large
Posted by C+C at 9:49 PM