During Fashion Week, big, glitzed-up runway shows are the “it” thing for many designers, big and small, as well as for the majority of the fashion cognoscenti; at least so far as the Lincoln Center scene goes. But, as with everything else, there are exceptions to the rule, as evidenced by the growing number of designers who opted to show their collections at The Box, a relatively small, intimate space, nestled discreetly within The Tents at LC. In a wise move, Rochambeau chose to show their very edgy, very dark and very off-the-beat menswear grouping at The Box, where the weirdly lit setting (no stage; eerie-scary, “Once Upon A Time” forest décor; moss and rocks hanging from the ceiling and strewn about the stage) ebbed and flowed around the cool, grunge-of-the-moment clothing and the strange-looking, long-haired and bald models. As editors and photographers swirled around the scene, the general consensus seemed to be that for real, Rochambeau’s show was just where it needed to be. Rochambeau (www.rochambeau.us.com), named after the French word for the game, “rock-paper-scissors”, was launched in 2007 by designers, Laurence Chandler and Joshua Cooper, both of whom hail from families with roots in print and graphic design. After a scant four years in business, Rochambeau had an array of big-name international stores carrying its clothing, and was tapped by MAC Cosmetics and Milk Studio, as one of the few designer collections to show a Fall/Winter 2011 Collection during New York Fashion Week. In September 2011, Rochambeau was picked by Jenne Lombardo, Global Fashion Director of W Hotels, to participate in the third season of The Fashion Next Program which fosters and supports emerging designers during Fashion Week and beyond, which brought the company full circle to its February 2012 FW showing at Lincoln Center. With an eye on a decidedly eclectic design motif, Chandler and Cooper serve up lots of under-and-over layering, in tandem with unexpected mixtures of classical fabrics (jerseys and knits), mixed in with textural and truly masculine hides and skins. The result is a mighty exciting line-up of clothes that run the gamut from sports and active-wear (yes, active-wear) all the way through to a new kind of dress-wear, the majority of which seems well-suited for a select group of those sexy, super-duper guys who want to make a pretty specific statement about who they are and how they want to dress; no fear here, obviously. So, with all of that being said, and following along that path, the color palette, naturally, has to be what it is - muted and drab (black, charcoal, greige and russet, for example). Ditto for the minimalist, sharply fitted blazers, pants and trousers, worked in all kinds of offbeat interpretations (waist folded and tapered; cropped and long harem pleated; pleat seamed; long layered short; high-waisted, drop-crotch, and, well, you get the point).


Rochambeau - Standout in Any Modern Dystopia 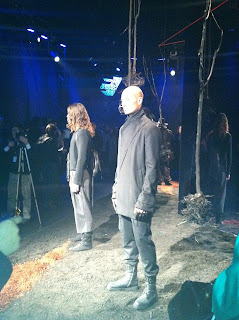 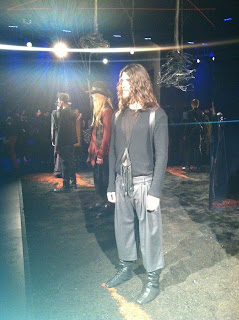 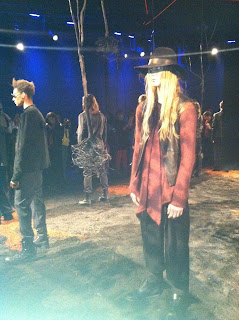 Photos Credit: Charlotte Manchester
All in all, the entire show worked, specifically in terms of showing off the clothes to the best advantage. A nod here to fashion stylist, Nicholas Grasa, who pulled everything together just right, not only when it came to how the clothes looked, but also for all of the sexy, black boots that all of the models wore, and the long, black leather pouches and pendants, which were wrapped seductively around some of the models’ necks. Oui, j’adore. – ADWB, editor-at-large, C&C
Posted by C+C at 9:50 PM