When most people think about the myriad of international Salvation Army Family Thrift Stores, there probably is nary a thought nor an kind of an idea about any of those stores being well-lit, open, airy; having clean, chic, eclectic interiors, not to mention showcasing exposed brick walls, carpeting, high-end, designer clothing, accessories, footwear, home furnishings, artwork, books, and so on and so forth.

Well, get ready to rethink what you ever might have thought about any Salvation Army Family Store, especially if you were (or still are) a shopper, and be prepared to be shocked, awed and blown away, because all of this good stuff is now available for everyone’s enjoyment; all under one very cool roof; within an experimental, Concept Boutique shop in the trendy 11222 zip code zone of Greenpoint, Brooklyn.

Back in late December 2014, The Salvation Army did something for the very first time; something so new and so different; something so radical and controversial, in terms of how it wanted to approach its retail business; broaden its growth, image, sales revenues. Obviously, the change made waves and drew headlines, not just because The Army had decided to completely shift its mentality and its retail gears; lifted the veil on its new M.O., but, more importantly, because The Army decided to put its money where its mouth is; i.e., launch a totally re-done, re-worked, refurbished, one-of-a-kind, never-been-done-before, intimate, jewel box of a shop, at 981 Manhattan Avenue, smack dab in the heart of trendy Greenpoint; dubbed “the new Williamsburg” by more than just a few of those well-placed, in the know scenesters. 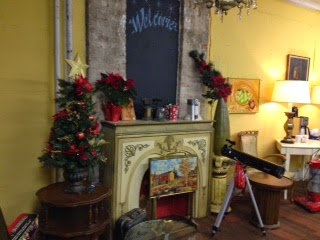 According to Major Joe Irvine, the soft-spoken and erudite, 25 year Army veteran, who was born to Canadian parents, and now serves as Administrator, for the Brooklyn Adult Rehabilitation Centers, all funded by the Thrift Stores, the idea behind the overhaul and renovation of the 35-year-old, 2,500 square foot shop into the chic, hip, Boutique-style Concept shop, is simple and direct. “Time to throw away the rule books and let’s see what works. We have to be forward-thinking, creative retailers, in order to help our people. We have 135 beds in Brooklyn alone; everything is free; while we do not take children; we will take anyone and everyone who needs help.”

For Irvine, his wife, Major Lisa Irvine, and William Franklin, Store Supervisor, the question of timing for the change was right on target; tying into Greenpoint’s location, hipness quotient, huge growth and rapidly changing face, popularity and population. According to Irvine, the former store, housed in a Salvation Army-owned building, and much smaller than any of the Army’s other Thrift Stores, probably would have closed; “the building might have just been sold off”; had it not been for the new model, which currently represents a first on the East coast. He expects the model to spread.

From start to finish, the overhaul work, which was mostly done by the Major, his wife and a few other Army workers in tow, embraced swapping out the old look of dirty store, (chipped, peeling paint on walls; cracked floors; horribly cramped aisles, boring, cheap clothing, hung cheek to jowl on old, falling down racks, dim lighting, sullen, rude employees, et al.) with freshly painted and exposed brick walls, elegant carpeting, interesting and bright lighting; lots of covetable, high-end, modern and vintage, designer merchandise, housewares, home décor, etc.; all easily accessible, neatly and beautifully arranged and displayed, either on fine hangers or well-folded inside of antique wood armoires, or atop open chests, plump couches, leather chairs, living room and billiard tables, etc. Definitely, no more falling down and dirty steel racks in this place anymore. And, while the old awning outside the shop remains for now, Irvine says that this, too, will change, as the shop grows and progresses. Then, there are the fashion-y, welcoming “Store Attendants” - Shannon and Tyasia – who were specifically hired to constantly provide excellent customer service; understand and cater to the younger, hipper shopper in a warm, non-threatening way.

In order to uphold the store’s retooled aesthetic, workers now cull through the gazillions of Salvation Army donations and then, cherry-pick those special, high-end goods for women, men, kids — or, simply unique items that just seem to fit; everything is then priced to sell from a mere $9.99, upwards to hundreds of dollars. On the day this Editor visited, there were well-priced, standout items galore; a natty, Burberry herringbone overcoat ($74); lots of cool Fedoras and knitted hats, scarves, gloves, pair of quilted, vibrantly colored Vera Bradley overnight bags ($46, $38); a really sweet Dooney&Bourke wristlet, complete with signature heart fob keychain/charm ($11); assorted cashmere and wool jackets, pants, sweaters; hip T-shirts, trendy athleisure gear; and lots more. Interestingly, a neat, oversized, men’s vintage leather bomber jacket ($68) was instantly scooped up by a cool Japanese girl from Astoria, who said that she first heard about all of the changes in the shop from her boyfriend who lives in Greenpoint.

Clothes Picked for You, Not Before You! 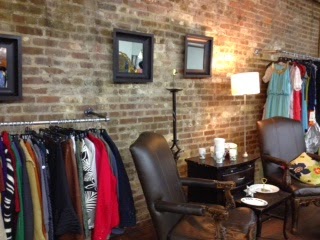 Explaining the raison d’être for the turn-around, Irvine explains, “the store was horrible; had long served its purpose; sales were at an all-time low; a struggle, in order to make $500 a day; staff, merchandise; atmosphere; everything in this store needed to be re-tooled and reinvigorated. Overall, the store simply represented a disservice to The Salvation Army, as well as the international Thrift Stores. The time had come to do something new and different, while at the same time, we needed to bridge the gap; stay true to our standards of always meeting the human need without discrimination; race, color, creed, budget, while continually honoring the customer, the donor and the beneficiary of all of our programs.”

Something Different, Something Simple and
Everything Better!

When asked about the possibility of some long-time neighborhood residents and former shoppers, being unhappy about the new shop and its new look, upscale, designer offerings, higher price points, hipster clientele, et al., Irvine does not miss a beat when he says,” some people are going to like the shop; some will not like what they see here. There are always positives and negatives in life and in retail, but I do believe that through the growth, on-going sales, word of mouth, popularity, etc., all of this will help bridge the perception of the store catering to only the upper class, young hipster.” Looking ahead, Irvine is more than just a bit optimistic for the shop’s growth and success. “The approach seems to be working well; sales have already increased by 30% to 50%. I’d like to see us realize around $350,000 in sales for the period through December 2015.”

Maj. Joe Irvine's Rebranding
Thrust SA to the Fashionista Front!
--not too bad for a Major-- 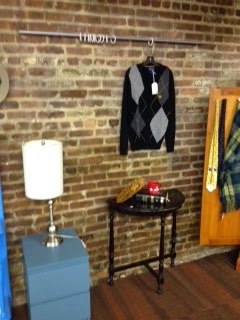 If you only knew the truth about Mrs Irvine and Mr Franklin...what they really do with the money from your donations...how they over price items and cheat people by making them think it goes to help the arc program but in reality they force these people to work 8 hrs a day slaving them and paying only $15 a wk...they're getting rich of other people's hard earned money and not even helping people who can't afford but really need things..they won't even let u go if you're short a penny..you should really think about this the next time you wanna donate

can you explain in detail how they ¨get rich¨off the shop?